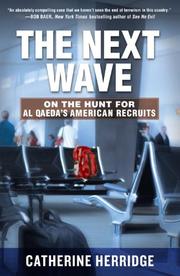 On the Hunt for Al Qaeda's American Recruits

Solid account of the growing threat of homegrown terrorists.

In 2009, FBI director Robert Mueller stated that American-born recruits to al-Qaeda posed a “real and growing” danger to the United States. Drawing on a six-month investigation for Fox News, where she is a national correspondent covering homeland security and the intelligence community, Herridge debuts with a revealing report on a new generation of terrorists and the American-born Islamic cleric Anwar al-Awlaki, who has inspired many of them to commit violent acts. Now believed to be in Yemen, al-Awlaki was targeted for killing by the U.S. government in 2010. He is linked to three of the 9/11 hijackers, the massacre at Foot Hood, the attempted Christmas Day 2009 bombing and the cargo printer plot in October 2010. Drawing on documents and interviews, the author shows how the charismatic al-Awlaki has become a leading al-Qaeda propagandist, using the Internet to recruit alienated American youths, many newly arrived in America, to join the terrorist cause. There are several hundred important jihadist websites, and al-Awlaki crafts messages (“44 Ways to Support Jihad,” etc.) for them using rap music and other Western marketing techniques. His target audience consists of under-30 individuals who are unsure of their identity and welcome a chance to connect anonymously online. In recounting al-Awlaki’s activities and the stories of young jihadists, Herridge notes that homegrown terrorists are often U.S. passport holders who travel abroad for training, and Americans who are radicalized at home in chat rooms. She offers evidence that al-Awlaki may have been part of a terrorist cell within the United States that paved the way for 9/11, and that American officials may have tried to turn the cleric into an informant.

A sobering view of why the 9/11 nightmare continues a decade later.