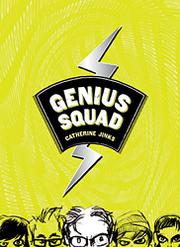 Computer prodigy Cadel’s belief that he’s escaped the clutches of his nemesis/supposed father Prosper English proves sadly mistaken in this pulse-pounding sequel to Evil Genius (2007). Chafing under constant police surveillance but feeling safer now that Prosper’s in jail, Cadel jumps at the chance to join a group of geeks secretly working to bring down corrupt genetic corporation GenoME—particularly because his conscience and best friend Sonja is part of the effort. All he has to do is keep his tails from finding out what he’s up to. Then Prosper escapes, snatching Cadel and Sonja on the way. Repeatedly displaying an amazing ability to analyze and manipulate systems but struggling to understand his confused feelings about Prosper and to overcome years of psychological conditioning, Cadel makes an uncommonly memorable protagonist. As Jinks makes use of many characters and references to events from the previous episode and leaves the main story line open, this one is plainly a middle volume, but the author’s ability to craft vivid characters and engrossing action scenes continues unabated. (Fiction. 12+)