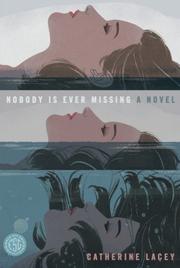 NOBODY IS EVER MISSING

Elyria Riley buys a one-way ticket to New Zealand, leaving her husband without warning or explanation, in Lacey’s debut novel.

Elyria, a soap-opera writer, is no stranger to the emotional drama that can permeate daily life. She's haunted by memories of Ruby, her adopted sister, who committed suicide by jumping out a window. It was through this traumatic event that Elyria first met Charles, a mathematics professor; Ruby was his teaching assistant, and he bonded with Elyria over their common experiences of loss. As she dryly puts it, “[a]nother terrible thing was how I met my husband.” Death forms the foundation of their marriage until the day Elyria leaves Charles behind and goes to New Zealand. Her life becomes a series of hitchhiked rides, strange encounters and odd jobs. The plot would be worthy of a soap opera if not for Elyria’s distinctive self-awareness and critical voice. She's a cold, distant observer of her own feelings and actions. Early on, this voice pulls the reader in and provides moments of great insight and wit. “[T]o love someone,” she states, “is to know that one day you’ll have to watch them break unless you do first.” But as Elyria moves from job to job, from place to place, relying on the kindness of strangers she's quick to abandon, she exhausts the reader’s sympathies. As a narrator, she grows both less relatable and less reliable until the plot reaches its inevitable conclusion. Elyria is the last to realize that what she's trying to escape, after all, is herself.