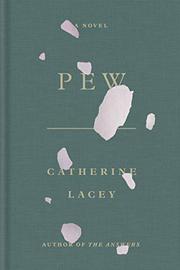 A silent stranger of indeterminate origin is discovered sleeping on a church pew in Lacey’s haunting fable about morality and self-delusion.

A nice churchgoing family—Hilda, Steven, and their three boys—in the small-town American South stumbles on someone lying down before services on Sunday and agrees to take the stranger in. “Steven and I decided that you can stay with us as long as it takes,” Hilda tells the stranger, who responds with silence. The stranger is illegible to them—racially ambiguous, of indeterminate gender, unclear age, no obvious nationality—and as an interim solution, the reverend decides they’ll call the stranger Pew, “until you get around to telling us something different.” They are kind, at first, and patient. Their questions as to Pew’s identity are only meant to help, they say—“we really don’t think you’ve done anything wrong, exactly,” and “God loves all his children exactly the same”—but still, they need to know “which one” Pew is, and Pew continues to say nothing. But other people do: Invited by Pew’s silence, they begin to confide in Pew, offering sometimes-chilling windows into their past lives. Pew, publicly silent but an acute observer of societal dynamics, is both the novel's narrator and its center, an outside lens into an insular and unsettling world. Pew’s only peer is Nelson, adopted by one of the church families from “someplace having a war,” a fellow charity case, ill at ease in town. “My whole family was killed in the name of God,” he says, “and now these people want me to sing a hymn like it was all some kind of misunderstanding.” As the week wears on, tensions begin to rise as the community prepares for its annual “Forgiveness Festival,” an ominous cleansing ritual central to the cohesion of the town. “The time right after, everyone’s more peaceful,” Nelson’s mother tells Pew. “Of course right now it’s a little more dangerous for everyone.” Setting her third novel in a placid town built on a foundation of unspeakable violence, Lacey (Certain American States, 2018, etc.)—spare and elegant as ever—creates a story that feels at the same time mythological and arrestingly like life.

Darkly playful; a warning without a moral.