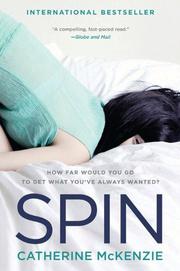 Sent to rehab incognito to get the scoop on a celebrity in distress, flaky Kate starts to clean up her own act, in a snappily phrased but mechanically composed entertainment.

Kate Sandford, 30, an unattached underachieving music journalist, is offered an interview for the job of a lifetime at music magazine The Line, but her weakness for partying leads to a spectacular act of self-sabotage. Then comes a second chance: The Line’s sister paper Gossip Central needs someone to go undercover for a month at the Cloudspin Oasis where self-destructive young actress Amber Sheppard is secretly undergoing rehab, and Kate gets the gig. McKenzie has a nice line in throwaway remarks and Jiminy Cricket inner voices, but her storytelling lacks crescendo and Kate has no back story until she starts to change under the effects of detox and therapy. Guilty about deceiving Amber, increasingly aware of past mistakes, reunited with her family and attracted to a sexy nonaddict, Kate looks to be growing a conscience. Once out in the world again, will she manage to live up to her new standards? Burdened by its length, downbeat scenario of deceit and addiction and feel of existing in a vacuum, this chick-lit tale fails to achieve lift off.