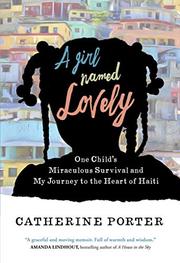 An award-winning Canadian journalist tells the story of her experiences in post-earthquake Haiti and of the special relationship she forged with a young survivor and her family.

In January 2010, the Toronto Star sent Porter (now the Canada bureau chief for the New York Times) to cover the Haitian earthquake as a foreign correspondent. Stories of human suffering “were on every street corner, each one more compelling and alarming than the next,” but the one that captivated her the most was that of a 2-year-old girl named Lovely, who had been pulled from the rubble, nearly unharmed, six days after the earthquake. The author first encountered the child at an emergency makeshift clinic in Port-au-Prince. Impressed by the girl’s preternatural toughness, the author searched for—and miraculously found—the child on a subsequent trip to Haiti. Awed that the girl had managed to stay alive “many days longer than was medically possible,” Porter decided to write about Lovely. Breaking “the cardinal rule of journalism,” she also became directly involved in the girl’s life, paying for her education and giving money to help her parents get on their feet. The author also eventually donated money gathered from her Canadian readers to fund a school. Her efforts met with mixed results: Lovely thrived scholastically, but her father failed to make a go of his motorcycle taxi business, and they constantly struggled with their finances. The school Porter funded succeeded, but money mysteriously went missing from its accounts. Yet in the end, the author had no regrets. As messy and complicated as her relationship to Haiti had become, she also realized that her life and the lives of her family members had become immeasurably enriched through that connection. Powerful and searching, Porter’s book offers an unforgettable account of how one woman’s humanitarian gestures not only changed her, but also made a difference in the lives of people living in unimaginable misery.

A movingly candid memoir about finding some measure of hope in “the poorest country in the western hemisphere.”