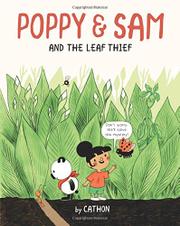 POPPY & SAM AND THE LEAF THIEF

From the Poppy & Sam series

A tiny girl and her miniature panda companion solve a mystery and help their plant and insect friends.

Poppy is a small girl who lives inside a hollow pumpkin set in a pumpkin patch. Her panda friend, Sam, who acts like a child or younger sibling, helps her tend her garden. One day, they hear yelling nearby and run to find the cause. It’s Basil: Someone bit their leaves while they slept and they and the other plants are outraged. Poppy promises to help find the culprit. When interviews with Ms. Honeybee, Ladybug, and Mr. Bumblebee result in conflicting accusations, they make another plan to catch the thief. After two more failed attempts, Poppy finally figures out a clever way to find the nibbler. The thief apologizes and discovers that Basil is more than willing to share a leaf or two: “You only have to ask.” The simple, clean drawings are colored in natural tones, and the panels resemble comic art, varying in size to complement action and drama. Poppy may be curiously small, but she is resourceful and smart. With a dark beige skin tone and straight, black hair in a topknot, she is ethnically ambiguous; that she is a clever girl of color will appeal to many readers. The plant and animal friends are as adorable as Poppy and Sam, and there are clever surprises to discover on several pages.

An appealing whodunit about friendship and community, great for fans of comics.