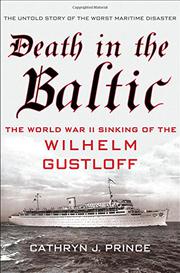 DEATH IN THE BALTIC

The World War II Sinking of the Wilhelm Gustloff

The story of the worst maritime disaster in history—and it wasn’t the Titanic.

Former Christian Science Monitor reporter Prince (A Professor, a President, and a Meteor: The Birth of American Science, 2010, etc.) pursues the little-known sinking of the German cruise liner Wilhelm Gustloff off the Polish coast in 1945 by Soviet torpedoes, to the incredible loss of some 9,000 lives, mostly refugees from East Prussia. Fleeing the Soviet Red Army advance on the Baltic coastline in late January, the German refugees were crammed aboard a converted pleasure cruiser as part of Adm. Karl Donitz’s operation to help save military personnel and civilians from the Soviet onslaught. However, the effort came late: The Nazis forbade inhabitants of the eastern provinces to vacate before 1945, and soon, escaping by land would be impossible and by sea, frequently catastrophic. Thousands of refugees swarmed the port at Gotenhafen, waiting for days before boarding one of the available vessels, of which the Wilhelm Gustloff was the largest. Prince has scoured the planet for survivors, treating their harrowing stories with gentle empathy, from the first sickening bolts of the torpedoes to the chaos and terror of the ship’s swift sinking as passengers fell into the freezing water, clambered for lifeboats and watched loved ones disappear in the tumult. Prince’s detail extends to the experience of the troubled Soviet captain of the S-13 submarine, Alexander Marinesko, considered a hero for having “destroyed the symbol of Nazism itself.”

An engaging study of a shocking tragedy, in which the author takes pains to view all sides.