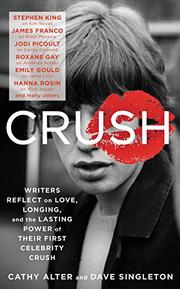 Writers Reflect on Love, Longing and the Power of Their First Celebrity Crush

A few dozen writers recall their childhood infatuations with celebrated media stars or iconic characters (literary or animated) and how these crushes influenced their future lives.

Editors Alter (Up For Renewal: What Magazines Taught Me About Love, Sex, and Starting Over, 2008, etc.) and Singleton (Behind Every Great Woman is a Fabulous Gay Man, 2005, etc.) make a few lofty claims about celebrity influences in the introduction, but they are surprisingly well played out in these sharply observed pieces: “Celebrity crushes change and mold us into the people we will become,” they write, “shaping our ideals, fueling our fantasies, aiding and abetting our conquests, and leading us to (or away from) the people we meet and fall in love with decades later.” Though boasting big-name contributors such as James Franco and mega-selling authors Stephen King and Jodi Picoult (both deliver impressive pieces), the more memorable stories come from lesser-known talents. Among the standouts is “My Own Private Danny Zuko,” in which Yesha Callahan recalls her budding romance as a black teen with a visiting white neighbor, a young John Travolta–like double, which led to an anguished confrontation with racism. Larry Doyle tells of his obsession with Mary Tyler Moore as the Laura Petrie character from the Dick Van Dyke Show, and David Shields writes about Barbara Feldon’s Agent 99 in Get Smart—each are stylish and hilarious inclusions. Caroline Kepnes grudgingly revisits an awkward letter-writing correspondence with 90210 actor Brian Austin Green, and Richard McCann’s fascination with Bette Davis and her influence on his emerging gay awareness provides the basis for a marvelous multilayered story that begs to be expanded into a full-length memoir. Loosely organized into eight chapters, the collection also includes pieces from Joanna Rakoff, Roxane Gay, Shulem Deen, and Shane Harris.

The seemingly lightweight premise of an anthology built around celebrity crushes yields an outstanding selection of poignant and thought-provoking stories.