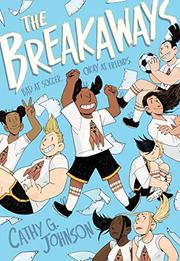 When black fifth-grader Faith is recruited to the girls soccer team on the first day of school, she hopes to be welcomed into the popular older crowd. But Sodacan and Marie, two cynical but welcoming white seventh-graders, inform her that the three of them are firmly at the bottom of the C team. At night, Faith draws and then dreams of a mysterious brown-skinned knight named Mathilda who whisks her away on magical adventures that help her navigate her waking surroundings. Each team member has life issues that they bring onto the field: Crushes, sexual harassment, rivalries, and cliques provide enough distraction to keep the team from winning. It’s an exciting portrayal of young characters exploring their sexual and cultural identities, but there is an awful lot going on. With so many characters and storylines it becomes difficult to grasp any singular theme or connect with all of the personalities. Hijabi MVP Nadia helps rescue the season; vegan Sodacan recruits teammates into her all-girl band; Latinx Yarelis takes the game super seriously; Vietnamese-American Huong’s busy parents are unable to attend her matches. In one of the many sensitively handled moments, one player comes out to a teammate as a trans boy during a sleepover. Happily, though it’s stylized, Johnson’s art successfully individuates the many characters, aided by Czap’s soft pastels. Readers will be sorry there are no additional volumes planned to flesh out these characters further.

Groundbreaking—and as complicated as middle school.