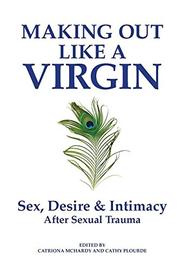 Sexual abuse survivors from around the world detail their journeys to healthy sexuality and bodily autonomy in this collection.

In this volume featuring 17 nonfiction essays, sexual trauma survivors describe their experiences with making out like a virgin “by encountering an altogether new way to engage in sex—one that’s emotional as well as physical.” Each author picks a particular angle from which to present his or her story while keeping within the theme of the collection. In “One Woman, Many Names,” Sally J. Laskey depicts her journey from “the Rape Lady” to “the Sex Lady” as her growing awareness of her own secondhand trauma leads her from rape crisis work toward a role as a sexuality educator. In “Freedom at My Fingertips,” Sarah Mell expresses the liberation inherent in masturbation after a lifetime of considering her own vagina a space meant for others. In “Four Out of Five,” Glen uses humor to take ownership of his experiences of sexual assault and turn them into tales that exemplify his skills of observation and judgment—abilities that he feels have increased as a result of his encounters. Tara Abrol explains how going for a year without having sex has made her sexuality seem more personal and less performative in “Year of the Make-Out.” While the collection’s concept of virginity carries uncomfortable connotations that valorize purity and inexperience, it is clear that editors McHardy (a Community College of Vermont faculty member) and Plourde (Out & Allied Volume 2: An Anthology of Performance Pieces Written by LGBTQ Youth and Allies, 2014, etc.) and the essayists have good intentions. For the most part, the authors avoid these associations in the actual essays. The stories are by turns moving, horrifying, and funny, and they truly represent an array of experiences and viewpoints; each author may find healing through meditation, massage, forgiveness, anger, sex, or celibacy. It is true, as the editors explain, that these essays are no “ten secrets” guide to finding a positive path after abuse, but they are vibrant tales of rediscovering sexuality and vitality.

A valuable compilation that represents multiple paths for healing and thriving after sexual trauma.