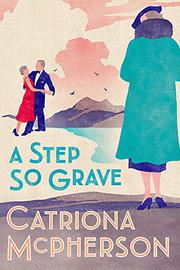 A STEP SO GRAVE

An upper-crust detective tackles a case that deeply affects her own family.

It's February 1935, and Dandy Gilver (Dandy Gilver and a Spot of Toil and Trouble, 2017, etc.), her husband, Hugh, and their two sons, Donald and Teddy, have come to the remote Scottish estate of Applecross to meet the family of Donald’s intended, Mallory Dunnoch. Mallory’s mother, Lavinia, Lady Dunnoch, Viscountess Ross, is known as Lady Love. And it does indeed seem that she’s loved by all, including Donald, who clearly has a crush on her. At 30, Mallory, Lavinia’s elder daughter, is older than Donald, but Dandy comes to admire her as she gets to know her better. Lavinia’s husband, Lord Ross, has used a wheelchair ever since he was wounded during the war saving the life of the estate gardener’s son. His nurse and old pal, Dickie Tibball, is the father of Martin, who’s married to the Rosses’ younger daughter, Cherry, a partner just as devoted as Martin to managing the estate. The party assembled for Lavinia’s birthday also includes Dickie’s wife, Biddy, and Capt. David Spencer, another man in Lavinia’s thrall. Despite years of living in Scotland, Dandy’s still taken aback by local mores and frowns on Lavinia’s horticulturally rooted relationship with her gardener, Samuel McReadie, which is fueled by their mutual passion for Applecross’s stunning gardens. Although Dandy pooh-poohs several mysterious portents of danger, she agrees to wear a talisman to ward off evil. When Lavinia announces that she’s divorcing her husband and vanishes, taking her clothes and other personal property, Hugh refuses to countenance Donald's marriage and insists that his family leave the estate. No sooner have they arrived back home, however, than they’re greeted by a police inspector who announces that the unseasonable snow has melted to reveal Lavinia’s corpse in her beloved garden. The inspector is furious when the local police identify a passing tramp as her killer, a conclusion so ludicrous that Dandy and her family, joined by her fellow sleuth Alec Osborne, return to Applecross seeking the truth of a complex case steeped in folklore and family secrets.

A sophisticated, elegantly written, intensely powerful mystery, the best of an excellent series.