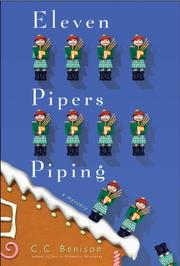 The vicar of Thornford Regis finds his parish riddled with gossip and crimes, past and present.

The Reverend Tom Christmas and his daughter, Miranda, settled in Thornford Regis after the murder of his wife devastated his family. Although he doesn’t care for bagpipes and loathes haggis, Tom finds himself attending the annual Burns supper at a local hotel currently closed for renovation. The owner, Australian Will Moir, seems a bit distracted. Tom has no chance to learn why, for Will’s body is shortly found in the tower at Thorn Court Country Hotel during a massive snowstorm. Police investigators learn that he was poisoned with yew seeds. When Judith Ingley, a retired nurse who years before lived at Thorn Court, shows up at the closed hotel, Tom takes her in. Many villagers think vicarage housekeeper Madrun Prowse, who provided the yew berry tarts for the dinner, simply made a deadly mistake. The police, however, have plenty of suspects who may have wanted Will dead. A family who lost their son to suicide after Will verbally attacked him is the most likely. But as Tom begins to learn some long-hidden secrets, he realizes that the killer is far from obvious. A second murder redoubles his efforts to find the truth.