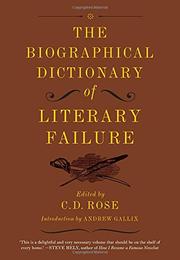 THE BIOGRAPHICAL DICTIONARY OF LITERARY FAILURE

Rose poses as the “editor” of this book, a series of clever (and occasionally hilarious) literary vignettes about authors whose careers never quite panned out owing to personal, cultural or artistic failings.

The novel has a distinctly Borges-ian feel to it, and Borges himself is referenced numerous times, both in the introduction and some of the 52 entries. We meet authors who will never, alas, be household names. In fact, Rose has a great deal of fun making up names for his putative literary failures. We meet Hermann von Abwärts, for example, who’s written a “frankly derivative” manuscript entitled The Sorrows of Young Hermann and who is beaten over the head with his work by illiterate thugs. Another author memorable for being unmemorable is Lord Frederick Rathole (pronounced “Rath-ole”), who designs an octagonal library with sides of differing lengths. Undeterred, Rathole “dismissed the builders, insisting his vision worked on a higher degree of non-Euclidean geometry.” Wendy Wenning is an author so ruthless in editing her work that she first removes all the adjectives (which she sees as “enemies”), then relative clauses and passive voice. As she keeps paring, she eventually gets to the final stage, and when she pushes the “print” button, discovers that what emerges is a blank sheet of paper. Similar to Wenning is Virgil Haack (a delightful pun), who, “convinced that less was certainly more,” puts a single word on the only page of his novel: the letter “I.”

In presenting his failures, Rose makes highly literate and arcane references to a vast number of authors and literary theoreticians, and it’s great fun for the reader to become part of the game.