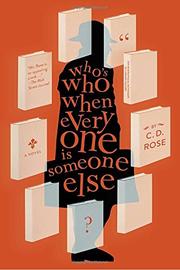 WHO'S WHO WHEN EVERYONE IS SOMEONE ELSE

A clever novel about novels that is playful and more accessible than many other experiments in metafictional writing.

The narrative line is straightforward—an anonymous narrator who has edited a moderately successful book has been invited to an anonymous European country to deliver a series of lectures on 10 lost, neglected, or forgotten novels. (In a footnote, the narrator shrewdly and wittily references his previous work as Rose’s first novel, The Biographical Dictionary of Literary Failure.) Much of the novel is taken up by the 10 lectures he presents. While at first he finds himself speaking to enthusiastic academic audiences, by the final lecture there is literally no one in attendance, and the “lecture” consists of four blank pages of silence. In the lectures the narrator “quotes” from the illusory books and speculates on their significance, delving into issues of why they’ve been forgotten or neglected, and this speculation often leads him to aesthetic issues about fiction in general (e.g., “If we can say that this book is ‘about’ anything...it is about lives passing in moments, and moments taking lives to pass”). After each public presentation, the Profesora, one of his hosts for the series, critiques his lecture over cigarettes and coffee, usually rather harshly ("Poor ending....Weak..."). And if 10 lectures about imaginary books, critiques of those lectures, and debates about the aesthetics of literature were not enough, we learn that the narrator is trying to track down information about Maxim Guyavitch, an enigmatic and elusive author he finds fascinating, in part because Guyavitch has written only nine stories. By the end of the novel it’s not clear to the narrator whether Guyavitch has ever existed.

A witty, guileful novel that underscores the slippery connection between fiction and “real” life.