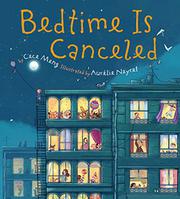 Maggie and her brother write a note to their parents announcing the cancellation of bedtime. Of course their parents don’t believe it and throw the note in the trash. The note flies out the window, lands on a reporter’s desk, becoming headline news in print and on television and in endlessly forwarded emails. Now bedtime really is canceled, and chaos ensues. The children stay up all night playing, snacking and watching TV, with this scenario repeated all over town. Morning brings exhausted adults who can’t function, though children seem remarkably unaffected. The next note takes pity and, to every parent’s delight, revokes the disastrous change and reinstates the natural order of things. All these notes work so well that Maggie and her brother try a new message….Meng playfully expands and exaggerates children’s efforts to put off the inevitable lights-out and turns a universal tug of war into a hilarious tour de force, with the children decidedly in charge and loving it. Neyret’s digital illustrations have a mangalike sensibility, depicting very modern settings with wide-eyed, expressive characters, joyfully enhancing the goofy proceedings and adding a few sly touches of her own.

Suspend all disbelief and enjoy.