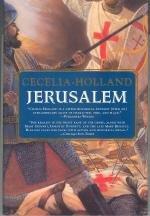 Holland is back in the mists of the far past again after her forays into pioneer California (Pacific Street, 1992, etc.). This latest is one of her dark, well-paced, competent re-creations of power struggles among the mighty—here, in the wars between Christians and the Islamic forces of Saladin for control of the Holy Land in the late 12th century. The fictional linchpin in Holland's story of Jerusalem's internal battles and deadly warfare is the Norman knight Rannulf- -illiterate and disliked—who had a religious conversion (after sinful living) and joined the Knights Templar. The leper king of Jerusalem, meanwhile, Baudouin (Baldwin IV), is wise and brave, but he hasn't long to live, and his dearly loved sister Sibylla feels she's destined to be Queen of Jerusalem. Despite her brother's wishes, accordingly, she decides to marry a weak man—Guy de Lusignan—and truly rule. She'll also seek (in vain) to end the war by a summit with Saladin. Eventually, after the death of her child (Baldwin V), Sibylla will indeed be queen. In the meantime, Rannulf fights off physical and verbal assaults and wrestles with his vow of chastity. He and Sibylla have a few fleeting moments of secret love, and a Frankish knight, Rannulf's friend, finds amour in the arms of a nephew of the Sultan. Intrigue and frustrated policy thickenboth in castles and in battleground tentsas powerful nobles like Raymond of Tripoli, the King of Jerusalem, and the Master of the Templars contend. Finally, the Christian forces are defeated at Hattin, followed by a surrender with no mercy as Sibylla weeps at the destruction she thinks she's caused. Again, Holland paints inventively the faded images of real people, convincingly re-creates the sites of ancient Jerusalem, and offers both grue and understated commentary on bloodshed in the place where ``Jesus and Mohammed had stood face-to-face.''