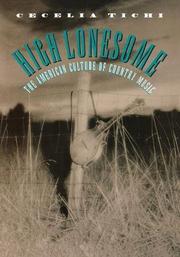 The American Culture of Country Music

A dry exegesis of country music by the author of Electronic Hearth (1991). Tichi (English/Vanderbilt Univ.) is a novice fan of country music whose background is strongest in American literature and art. Proceeding thematically, she addresses common issues in American culture, including the tension between the individual and society, the lure of home versus the call of the road, and nature as both a nurturing and potentially dangerous force. Lacing together anecdotes, interviews, and analysis of songs, she comes to the conclusion that country music addresses many of the same topics as more ``serious'' art forms, making it ``emphatically [a] national music.'' While her discussions can be interesting, ultimately she offers little new to explain the popularity or quality of country music. The musicians she favors—Emmylou Harris, Rodney Crowell, Laurie Lewis, Nanci Griffith, and Barry and Holly Tashian—all come out of a folk-rock background (in the '70s, they would have been called singer/songwriters), so they naturally tend to take an intellectual, pseudoliterary approach to songwriting and performance. Tichi's musical knowledge is slim, leading to some factual errors, as when she ascribes ``Dueling Banjos'' to Earl Scruggs, though it was in fact recorded by Marshall Brickman and Eric Weissberg. And the comment that ``the ability to read music would be futile for bluegrass...the music simply moves too fast to be read off the page'' would come as a surprise to any classical violinist who's ever tackled Paganini. The book is accompanied by a CD that primarily focuses on new country acts; this material is readily available, and it would be surprising if a reader who was attracted to this book did not already own most of these recordings. A tip of the academic mortarboard towards the ten-gallon-hat crowd that will befuddle members of both groups. (122 b&w photos and 16-page color insert)