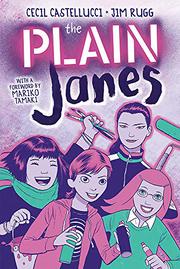 From the Janes series, volume 1-3

In the first installment, printed in blue ink, Jane “Main Jane” Beckles was a regular teen until she was caught in a bombing in her city that prompted her parents to move to the suburbs. In her new school, she and her new friends—Jane, Jayne, and Polly Jane—form a guerrilla art group called P.L.A.I.N. (People Loving Art In Neighborhoods). The second entry, printed in pink, has the Janes struggling with interpersonal conflict and a lack of funds for art supplies. Jane corresponds with Miroslaw, the Polish stranger whose life—and sketchbook—she saved in the explosion and whom she visited while he recuperated, unconscious, in hospital. Volume 3, which features green ink, picks up as the Janes scatter for summer break with Main Jane traveling to France to visit Miroslaw and attend an art class taught by his girlfriend. The illustrations smoothly integrate different art styles so that readers experience them at the same time Jane does. Upon returning for senior year, Jane meets Payne, a new student who holds radically different views on art. Their push and pull deftly shows how complex relationships can be and how competition can build both stronger art and stronger friendships. Main characters are white. Unfortunately, the word “tribe” remains in these reprints.