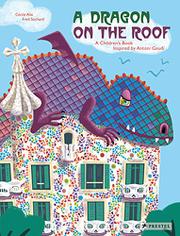 A DRAGON ON THE ROOF

A quirky story of a girl and a dragon inspired by the equally quirky Casa Batlló, designed by the celebrated architect Antoni Gaudí.

As her nanny sleeps, Paloma hears a sound at the window. Upon her opening it, a frightened bat flies in. It is fleeing something, and that something is now on the stairs. Unafraid, Paloma seeks it out. Eventually catching up to the creature—now identified as a dragon—Paloma tickles it between its scales, causing the dragon to explode in laughter and so “unleashing the sea and all its waves, tuna, crabs, cuttlefish and seaweed!” Having unwittingly swallowed all this during a previous yawn, the dragon is sorry to have caused a flood in her house and now just asks for a place to sleep. He curls himself up on the roof, “closes its eyes and falls asleep.” Paloma returns to the room where her nanny is waking up, unaware there is a dragon on the roof. As the adventure takes place, the illustrations portray columns in the shape of bones, a staircase like a winding spine, and tile work resembling an oceanscape. Should children believe the house is the product of the illustrator’s imagination, photographs of the real Casa Batlló in Barcelona show that the house does exist and that a dragon sleeps on its roof.

A whimsical introduction to one of the most unconventional architects of the 20th century.