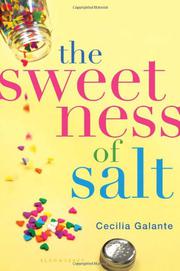 THE SWEETNESS OF SALT

On graduation, valedictorian Julia has her summer planned out—avoid Milo, who snubbed her after prom; start a prestigious internship, arranged by her lawyer father; pack for her first year in prelaw, also encouraged by her father—until her polar-opposite sister, Sophie, shows up and demands that Julia be told the truth about the family’s secret past. Feeling betrayed after learning that she had a sister who lived and died before she was born, the usually calculating teen gives up all her plans to follow Sophie back to her small Vermont town and help her turn an old house into a bakery, Sophie’s longtime dream. In this slow yet ultimately satisfying story, as Julia reconnects with Sophie, gets to know the locals and begins talking to Milo again, she discovers that she has more in common with Sophie than she ever imagined, how their sister actually died, the real meaning of honesty, a sense of community and her own aspirations. Like salt brings out sweetness, the drama draws out the sweet, sniffle-inducing ending. (Fiction. YA)