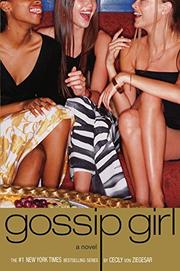 Deliciously catty and immediately engrossing, this is the ultimate beach read for teenage girls, offering them a titillating peek into the heady world of Manhattan’s well-heeled teens, private-school kids who “have unlimited access to money and booze,” and—since their prominent self-involved parents are terribly busy and largely disinterested—“tons of privacy” as well. Appearances reign in von Ziegesar’s world, and the kids are free to do as they choose as long as they don’t “embarrass . . . the family by puking in public, pissing their pants, or ranting in the streets.” Loading it with labels and writing in a breathless style, von Ziegesar amusingly and succinctly sums up her characters. For example, a mother’s less-than-classy new boyfriend is described as looking “like someone who might help you pick out shoes at Saks.” The plot in this private-school intrigue/slice-of-life drama concerns the homecoming of Serena van der Woodsen, a captivating hottie who “every boy wants and every girl wants to be.” Once the undisputed ruler of the reigning clique at the select Spenford School, Serena becomes an instant outcast, as the jealous and ambitious Blair Waldorf, the new queen bee, is not willing to surrender power or her handsome boyfriend. It should be noted that various youngsters smoke cigarettes, have sex, use marijuana, drink alcohol, and throw up after meals, and while these activities are not glamorized, they are presented as business as usual. That caveat aside, girls should find this lightweight novel spicy, entertaining, and their own trashy fun. (Fiction. YA)