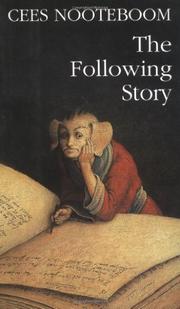 Philosophy, mythology, humor, and love blend comfortably in this novella, which won the 1993 European Literary Prize for Dutch author Nooteboom (The Knight Has Died, 1990, etc.). When bookish bachelor Herbert Mussert awakens in Lisbon, his last memory is of going to bed in his solitary apartment in Amsterdam. Troubled and bemused by his amnesiac journey to the city—indeed the very hotel room—where 20 years earlier he shared a passionate sojourn with a lover now lost, he contemplates and discards one explanation after another. Then he sets out to revisit the cafes, boulevards, and harbor where he and Maria Zeinstra dallied two decades before. A teacher of biology in the same school where he taught classical languages, Maria mesmerized Herbert with her ability to transform the usual into the unique. Transfiguration—whether of a homely intellectual classics professor into a besotted lover or of the Latin language into sublime poetry—has always fascinated Herbert. Maria's elucidation of the ultimate metamorphosis from life to death and its essential link to love is rendered in a deadpan description of her classroom lecture on mating, death, and birth among a species of beetles; its flattened tone makes an unlovely subject fresh and slyly funny. Herbert also remembers his gifted student Lisa d'India, whose affair with Maria's doltish husband led to a tragedy of classic scope, diminished by the survivors' banal responses. One day, as inexplicably as he arrived in Lisbon, Herbert boards a boat bound for Brazil with a handful of other passengers. As they approach Brazil, each passenger reveals the hidden event that has led to their common destiny, and the mystery of Herbert's journeys is solved. Nooteboom scores with a pleasantly textured tale whose subtle mysteries keep the reader alert through all its diverting wanderings.