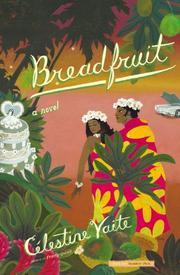 When we last saw Materena Mahi, on the island of Tahiti (in Frangipani, Feb. 2006), her children were grown and starting lives of their own. Vaite turns the clock back a decade or so here, reflecting on the time when this matriarch was building her family. The title refers to the legendary tree that provides nourishment for Tahitian families when money is scarce. With the help of the breadfruit tree, Materena finds there’s always enough food to satisfy her family. Money may be tight in Materena’s home, but there’s an abundance of love and strong opinions—even the children are sassy. The story follows Materena and Pito, her longtime partner and lover, as they ponder marriage, tackle parenting and try to cope with intrusive, yet well-meaning family members who surround them in their small island home. Materena is obsessed with love—be it weddings, love songs or love stories—and she longs to feel appreciated and admired by her man. Tired of merely being Pito’s woman, Materena won’t rest until Pito recognizes their union in a meaningful way. Vaite explores the meaning of marriage and the value of living free from society’s expectations, once again transporting her readers to a faraway land where family comes first and where there’s always time to stop and share. Materena is a patient listener, always giving the storyteller her undivided attention, and for this reason, all the best stories from the “coconut radio” (island gossip) make their way to her ears. The recanted island legends and family lore can be a bit rambling at times, but Materena embraces each gossip session with an open mind and open heart.

Lyrical and breezy. A story about the power of friendships and the importance of savoring life’s simple blessings.