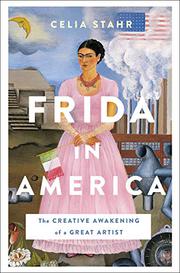 The Creative Awakening of a Great Artist

An art historian parses the famed artist’s complicated psychological and emotional states while in America as a young wife and emerging artist in the early 1930s.

Stahr (Modern American and Contemporary Art/Univ. of San Francisco) captures Frida Kahlo (1907-1954) in all her ambiguity at age 23, when she embarked on her first American tour with her new husband, famous muralist Diego Rivera. As the author shows, she moved into this uneasy public role while also passionately pursuing her own difficult work. Diminutive in stature and unwell due to an early bout of polio and a terrible car accident in her late teens, Kahlo, like Rivera, was deeply devoted to her Mexican identity as well as socialist ideals. These beliefs would both alienate their American patrons, as in Rivera’s case, and attract the avant-garde, as in Kahlo’s case in New York, where she had her first solo show in 1938. In 1930, visiting San Francisco for the first time, as Rivera painted his commission for the California School of Fine Arts, and then through their stints in Detroit and New York over the next three years, Kahlo devoured the strange sights and used her experiences to inspire her art. She made friends with women artists especially—e.g., Dorothea Lange, Lucienne Bloch, and Georgia O’Keeffe—experimented with her Indigenous (now iconic) wardrobe as she became a darling subject of photographers, grew embittered by her husband’s serial infidelities, and had a devastating miscarriage. All of this served as fuel for her early groundbreaking portraits and self-portraits, which were full of symbolism and blood and gore. Stahr sees the emergent artist’s powers explode in My Birth, an unsettling painting from 1932 that addressed Kahlo’s miscarriage, the recent death of her mother, and her own self-creation. The author’s deep study of Kahlo’s symbolic layering is highly informative, though some of the detail may be overwhelming for readers not versed in art history.

The first major biography since Hayden Herrera’s 1983 work presents the artist in all her ferocious complexity.