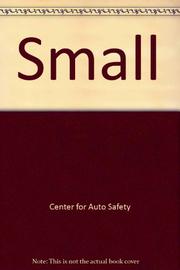 The Designed-in Dangers Of The Volkswagen

by The Center for Auto Safety & Ralph Nader

Nader himself headed the task force which produced this report, an alarming document which brands the Volkswagen as "the most hazardous vehicle used in significant numbers in the United States." Based on publicly available reports (Consumer Union; Cornell's Automobile Crash Injury Research Project), records of court cases instigated against VW, and individual case studies from the Auto Safety Center's fries, Small — On Safety charges categorically that the Beetle (Type I) has caused "the deaths and injuries of thousands of people" and that the Type II microbus is even worse — "by a wide margin the most dangerous four-wheel vehicle of any type designed for highway use and sold in significant numbers." Structural criticisms ranging from the Beetle's "erratic dance" (roll-over capability) before the crash to ejection problems during the crash (faulty door latches, etc.) to the "up in flames" potential after the accident (poorly designed fuel system, defective gas filler cap, etc.) are extensively documented; the microbus allegedly has all these defects plus lack of protection in front-end crashes, insufficient passing ability, inadequate uphill performance, frequent horn failure — the model "should be removed from operation entirely." VW is certain to contest the Nader blitzkrieg — in fact the campaign has begun in the company's trade publication Small World — but at the moment the people's car and the occupants in it seem headed for big trouble.