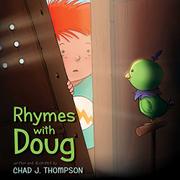 An anonymous gift of a rhyming parrot sets off a precarious adventure for a young boy.

Doug, a redheaded, freckle-faced white boy, and his friend, a black girl with pom-pom pigtails who’s not seen again until the end of the book, notice a mysterious package by the mailbox. Out comes Otto, a deceptively cute, green parrot that speaks in rhyme—to magical effect. “DOUG HUG” produces a warm embrace from Otto. “DOUG MUG” elicits a hot cup of cocoa. Then the rhymes become creepy as the magic begins to go awry. “DOUG SLUG” and “DOUG BUG” transform Doug, quite upset, into each creature, respectively. Pleas from Doug to change him back to a boy succeed—with complications: “DOUG DUG. / DOUG RUG” take him from an underground cave to a magic carpet ride above the city, finally culminating with the boy safely in bed… “DOUG SNUG…BUG…RUG….” Thompson’s digitally created cartoon drawings in bold colors are reminiscent of a comic strip, and the format mixes narrative with speech bubbles to extend the familiar idiom, using wordplay and a graduated larger font indicating urgency. Simple digital backgrounds give way to photographic panoramas as Doug soars over the city. The absurd humor and haphazard context for the rhyme pattern make this book less skillfully predictable and balanced as such offerings as Nancy Shaw’s Sheep series for emerging readers.

A cache of better rhyming pattern books is available.