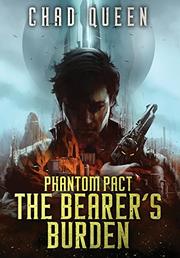 In Queen’s debut sci-fi novel, a man whose powers come from the souls of the departed must figure out why masses of people are vanishing before there’s no one left to save.

Cade Elegy is a member of the Bearers of Phantoms, a special force that make pacts with the dead to gain special abilities—the ability to “encode,” or transform their bodies into various substances, such as diamond, tungsten, and wood. It aids him in the fight against the Wraiths, an alien species that’s invaded the planet. Cade fought in a war against them a year ago, and although humans were victorious, some Wraiths still remain—and now entire cities of humans are disappearing. Cade has a mystery to solve, in addition to a desire to avenge those he lost in the war, but there’s one problem: His power comes at a price. Bearers of Phantoms who bear too many souls run the risk of destroying their own minds. The stakes are high. Will Cade be able to hold onto his sanity long enough to make a difference, or will he succumb to the phantoms that reside within him? He’s aided by a princess, an archaeologist, and an ancient artificial intelligence built by an extinct people who left technology behind that humanity barely knows how to use. Queen’s thorough worldbuilding paints vivid portraits of Cade’s home, its cities, its technology, and its threats, although there’s too light a touch when exploring the motives of the Wraiths and, at times, overly complicated detail regarding belief systems or abilities. That said, the narrative “encodes” different genres effortlessly, drawing on elements of traditional sci-fi, steampunk fantasy, Westerns, and political dramas. Each character is a delight to follow, motivated by distinct drives and desires. It would be easy for secondary players around Cade, such as rebel princess Ashlyn Winshire and bookish archaeologist Jace Exile, to be overshadowed by Cade’s lone-ranger heroism, but they’re given their own independent agency, and it’s made clear that Cade’s desire to save the world alone is unsustainable.

An entertaining adventure with complex characters and downright cool concepts for advanced technology and metaphysical abilities.