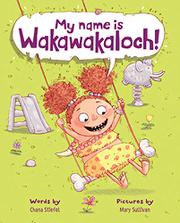 Wakawakaloch is very upset because others cannot correctly pronounce her name.

The illustrations depict Wakawakaloch living in a quasi–Stone Age community à la the Flintstones’; her home is in a cave dwelling, but her parents have laptops. After their distraught daughter declares, “Me changing my name to Gloop!” (or something else she might find on a T-shirt), Wakawakaloch’s parents decide that she needs to see Elder Mooch, who is described as “the wisest Neanderthal in the village.” While the child stresses over the mixed message given to her by Elder Mooch—to be both a “forward thinker and a backwards seer”—Wakawakaloch is inspired by her ancestor of the same name, who performed brave and heroic acts for the tribe. Wakawakaloch decides to do the same, embracing her namesake by helping others and selling T-shirts that celebrate names at the big Roll-the-Boulder tournament. In Sullivan’s cartoons, these Neanderthals are a multiracial bunch; Wakawakaloch and her parents have light skin, and she wears her supercurly red hair in two puffs. The stereotypically primitive speech patterns used in dialogue will set some readers' teeth on edge. On the other hand, Wakawakaloch’s frustrations surrounding the mispronunciation of her name will resonate with many, and her taking inspiration from her ancestor is a lovely touch.

This bombastic main character allows the story to shine.