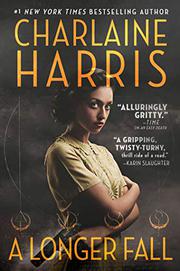 In the second installment of Harris’ weird Western series set in an alternate former United States (after An Easy Death, 2018), gunslinger/bodyguard for hire Lizbeth “Gunnie” Rose must accompany a mysterious crate to its destination, but things go terribly wrong.

A long train ride east to the country of Dixie isn’t 19-year-old Lizbeth’s idea of a good time, but it is a job, and she needs it, especially since her last job left her with a long recovery and no crew. Her new troupe, the Lucky Crew, seems competent enough, and when Lizbeth spots some suspicious folks on the train, she’s pretty sure they’re about to be tested. A shootout precedes an explosion that engulfs the train. Someone must really want the Lucky Crew’s cargo. Lizbeth has been shot, her crew has been decimated, and the contents of the crate are gone, but she’s still got a job to do. When a blast from Lizbeth’s past—Eli Savarov, a grigori, or Russian wizard—shows up, Lizbeth discovers that he’s in search of whomever hired the Lucky Crew to deliver the crate. Lizbeth agrees to take a job as his bodyguard, and the two, posing as a married couple (it’s only proper) poke around the Louisiana town of Sally for clues that will lead them to the chest. They quickly realize the town is in racial turmoil: Slavery doesn’t technically exist, but it might as well considering the backward attitudes of the townsfolk and their shabby treatment of Sally’s black citizens. It all seems to lead to a powerful family that holds the town in its thrall, and, of course, the explosive contents of that troublesome crate. Lizbeth and Eli spend quite a bit of time on old-fashioned sleuthing (and, delightfully, between the sheets), but the action ratchets up exponentially in the surprising last half. Lizbeth is a no-nonsense, dryly funny narrator, and while this installment lacks a bit of the spark of the first book, it’s still a shoot’em-up, rollicking ride.

The indomitable, quick-on-the-draw Lizbeth remains an irresistible heroine, and Harris proves she still has the magic touch.