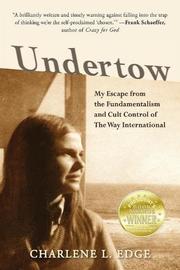 An author recounts her experiences with the religious group The Way International in this debut memoir.

Although Edge was raised Roman Catholic, she drifted from the religion as a teenager. Following the loss of her mother to cancer, she had questions about God that Catholicism seemed unable to answer. After participating in a Young Life camp and other flirtations with Protestantism, she came across some young men at East Carolina University who claimed to have something stronger. They were representatives of The Way International, a group founded by Victor Paul Wierwille, whose aim was to present the Bible in a way that “would reveal the original, noncontradictory, error-free Scriptures that God authored.” It was with The Way that the author’s life would change completely. From dropping out of college to becoming part of The Way Corps to marrying another member, she would spend years immersed in what many, including Edge, would consider a cult. Although The Way claimed to be an organization aimed at researching and spreading the original message of the Bible, the author argues that it was really a group that embraced the whims of its often moody leader: “This wasn’t a church where people attended only once a week, but a thriving family with a common cause.” It is easy to see from Edge’s account what might attract one to such a family, despite warnings from others. While a variety of controversies ended up surrounding The Way, the author’s most astute portrayal concerns her participation in its research branch. As she and others worked to translate old biblical texts, it became clear to her that the only interpretation that mattered was the one that had been decided by Wierwille. After all, his whole claim of authority came from his notion of “a perfect Bible.” Scenes of disagreements among researchers might not be as salacious as accusations of sexual misconduct within the group (which Edge mentions, though she did not experience it firsthand). But the clashes pointedly illustrate the contradictions at the heart of such an institution. If a research branch denies its own findings due to the will of one man, then surely trouble is afoot.

A frank, in-depth account of one woman’s struggles in a controlling organization.