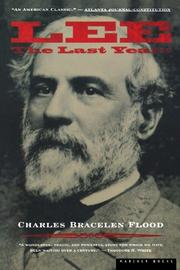 In the five years left him after Appomattox, Lee returned to Richmond, cast about for a farm, instead took a job as president of little Washington College in upland Lexington, Virginia--and perhaps proved himself a visionary educator. It's good to have Flood's researches on this score, replete with personal details also missed by previous biographers. But Lee's postwar life is not, as such, the crux of the book: in (what a Washington student called) ""the example of Lee""--his efforts to damp the fires, to bind up the wounds--Flood (Love Is a Bridge, Rise, and Fight Again) has found a novelist's human drama and a patriot's rousing theme. One can reasonably view the book as mythologizing Lee even as it demolishes the popular image: a property-less Lee domiciled, three months after the armistice, in a friend's four-room tenant house--where he is approached by a Washington trustee who has borrowed a suit and $50 to make the journey--is far more impressive, after all, than a stereotypical landed-aristocrat Lee. But it is impossible also not to be stirred--less by the drop in fortunes and the fortitude of this man in insignia-less gray (because he owns no other clothes) than by his consistent refusal to exploit his position. . . except to promote conciliation. We hear, of course, of his famous rejection of guerrilla warfare in lieu of surrender (""we would bring on a state of affairs that would take the country years to recover from""); but we also hear of his advice to Confederate officers to take the distasteful new oath of allegiance to the Union, his intercession to prevent lynchings in Lexington, his cordiality toward ostracized Northerners at White Sulphur Springs, his leadership in formulating the White Sulphur Letter--a statement of Southern sentiments toward the North and toward blacks regarded, then, as ""the most important document to be put forth since the close of the Civil War."" All of the book is hardly on this level: much about the Lees' domestic life, and the affairs of their daughters, is essentially scene-painting (though not the depiction of Lee's extreme possessiveness, in which his daughters acquiesced; nor of his flirtations with young females--perhaps in compensation for his wife's long invalidism). And the account of the innovations Lee backed at Washington College--the elective system, more ""practical"" education (even, prematurely, a business and a journalism school)--is incomplete without word of just who proposed them and what was in the air elsewhere. Nonetheless, this is the sort of work that inspires the reading of historical biography beyond the confines of academe--where its findings will have to be noted, too.