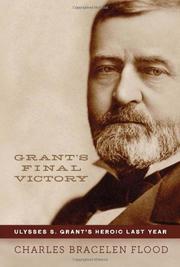 A lucid, often somber account of the sad but noble decline of Ulysses S. Grant.

Though he had served two terms as president, writes Flood (1864: Lincoln at the Gates of History, 2009, etc.), Grant was universally known as “General Grant.” He had left office under a shadow, several key members of his administration having been found corrupt, and he was determined to set an example as an honest businessman. And so, strangely, he went to New York to become an investment broker, where his partner swindled him out of his fortune and besmirched his name even further. With scarcely a cent to his name, Grant briefly entertained a magazine editor’s proposal that he write a series of articles on the Civil War but rejected it, saying, “I have no idea of undertaking the task of writing any of the articles the Century requests.” Yet eventually the thought of writing his own view of events became more appealling—notably when he was shortly afterward diagnosed with cancer. In excruciating pain, he wrote what has been considered one of the most important military memoirs ever produced, spurred along by friend and publisher Mark Twain (who, Flood notes, had been a deserter from the Confederate army). Writes Flood, with considerable elegance, “By deciding to give his work the full title Personal Memoirs of Ulysses S. Grant, [Grant] did himself a great favor. He could write about the things he wished to put before the reader, and omit those he did not. At one stroke, he relieved himself of the obligation to include everything he might know about a battle or a person, while reserving the right to dwell on a smaller matter or fleeting perception.” And so he did, writing of the hell and chaos of battle while suffering a second hell of his own. Upon learning of his death, Grant’s former opponent James Longstreet called him “the truest as well as the bravest man who ever lived.” In this swiftly moving narrative, Flood ably shows why he deserved the accolade.

A welcome addition to the literature surrounding Grant and his time.