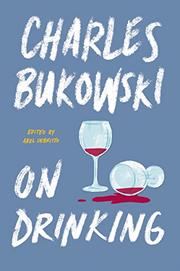 A writer confronts his muse, “my woman, my wine, my god.”

Following writing, cats, and love, this is the fourth in what has become a series of Bukowski (1920-1994) anthologies edited by former Fulbright scholar and current Marie Curie fellow Debritto. Drinking is one of the activities the self-described “life-long alcoholic” was most famous for—and was usually accompanied by writing. Covering the period from 1961 to 1992, the book is a hodgepodge of previously published and unpublished poetry, prose, interviews, letters, humorous drawings, and some photographs, most of the author with a bottle of beer or wine. Bukowski was always honest about his disease. In a 1971 interview, when asked if he was an alcoholic, he responded, “Hell, yes.” He was proud of his capacity for drinking and writing in spite of the suffering and hospital visits it caused. Never a fan of drugs, when drinking, he preferred writing poetry over prose, which was “too much work.” In 1989, he wrote to a friend, “I think I write as well sober as drunk. Took me a long time to find that out.” The collection reveals a man who claims he’s old and getting older, has worked odd jobs here and there, had sex with many women, and written a lot: “I drink when I write. It’s good luck, it’s background music.” Thank goodness Bukowski could laugh about his plight. Responding to an interviewer, he says, “In fact, I am drinking as I answer these questions.” This is a sad and depressing portrait of a talented man in self-destruct mode. In another interview, he says, “drinking is a form of suicide….It’s like killing yourself, and then you’re reborn.” The title of a 1973 poem says it all: “another poem about a drunk and then I’ll let you go.”

Despite the collection’s inevitable repetition, it provides another necessary, unsettling window into alcohol and art.