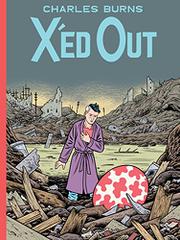 This graphic novel is more like an apocalyptic hallucination.

The first installment of what promises to be a full-color series from one of America’s most renowned graphic artists, appears in some ways to be a throwback to the comic books of old—similar length, size and paneling (though not price). Yet the visionary artistry of Burns (Black Hole, 2005, etc.) exists beyond the bounds of time and constraints of conventional narrative. To summarize the novel (nightmare?) is to misrepresent its contents and betray its spirit. What the reader learns from the start is that a man in pajamas with a bandage on his head lies in bed before his black cat (Inky) leads him through a mysterious hole in the brick wall of his spartanly empty bedroom. “This is the only part I’ll remember,” thinks the narrator. “The part where I wake up and don’t know where I am.” The realm he enters is more horror-land than wonderland, filled with threatening creatures, questionable food, language barriers and a flood of biblical proportions. It is also punctuated by flashbacks in which the man is identified as “Doug,” is at a party or performance space with his girlfriend, recites some lines from William S. Burroughs to an indifferent crowd and becomes attracted to an innocent-looking young woman whose photos suggest a streak of sadomasochism. The title might refer to the Xs on the calendar that he uses to keep track of his pills or the cuts on the arm of the young woman, though it is never entirely clear whether these flashbacks are memories or simply another alternative reality conjured by the bandaged man in the bed—assuming there really is a bandaged man in a bed.

The narrative builds to a revelatory climax that falls far short of a conclusion, implying the unstated, “To be continued…”