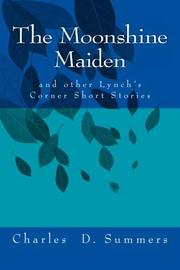 and other Lynch's Corner Short Stories

A collection of short stories that revolve around the history of a small town in Kentucky.

Summers’ (Ruadan, 2017, etc.) new collection of 20 tales is bound by a common locale—Lynch’s Corner, Kentucky—and covers its history from 1893 to 1986. The stories all share an artfully crafted atmosphere of austerity as they unblinkingly confront the harsh realities of life. In the first story, “Fair Game,” two close friends, Carson York and Thomas Mason, travel from Lynch’s Corner to Chicago to see the World’s Fair in 1893. After Thomas suddenly vanishes, Carson discovers that he’s not only dead—he’s also been sold to a hospital by a “resurrector,” a collector of corpses. Although it’s likely that Thomas was murdered, the hospital administrator recommends that Carson go home with a story that his friend died of a “sudden illness.” In “Rite of Fire,” set in 1898, Lynch’s Corner deputy sheriff John Reichmuth learns that a local woman, Bernice Caraway, was burned to death for witchcraft—because she simply used herbal remedies to heal the sick. However, it’s revealed that the men who killed her had other motives as well, and they all suffer mysterious accidents in the wake of her death. In these tales, Summers often provides profound meditations on the meaning of history and the lure of the past. For example, in “Blazing Noon,” set in 1904, Donnie greets information about his ancestors with a compelling mix of curiosity and skepticism: “I believe we chase the shadows of youth across the years, throughout our adult lives. And we never quite grasp that the joys belonged to someone else. We all change.” Throughout this collection, the author’s prose is self-assured and free of needless contrivance, and he shows considerable, nuanced skill at plot and character development. Overall, this is an excellent example of regional literature that offers readers a sense of universality, mined from concrete elements of everyday life.

A captivating assemblage of philosophical and meditative tales.