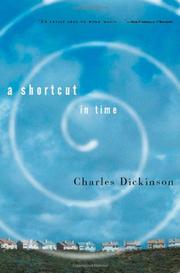 A SHORTCUT IN TIME

Going back in time doesn’t require multimillion-dollar equipment and flashing special effects, apparently; all it needs is for someone to run down a certain path at just the right time during a thunderous rainstorm. That, at least, is what underpins Chicago journalist Dickinson’s fifth novel (after Rumor Has It, 1990), a story of small-town science fiction. Dickinson nods in more than a few ways to the specter of Ray Bradbury by setting the tale in the bucolic burg of Euclid, Illinois, where one Josh Winkler, a dreamer and poorly selling artist who is essentially supported by his physician wife and who, by taking the above-mentioned little dash down an old pathway, gets dumped 15 minutes into the past. After that, things start to accelerate (though never too quickly: this is a 21st-century novel deliberately given 19th-century pacing and atmosphere), initially with the arrival of Constance, a young girl from the early 1900s who took the same fateful walk and is now trying to figure out her new surroundings. Not surprisingly, Josh is fascinated by Constance’s story, which his wife steadfastly refuses to believe is anything but a hoax, and, together, the two of them pore over microfiche news stories, trying to piece together whether Constance ever made it back to the past. Meanwhile, reports of Josh’s apparent mania have spread through Euclid; people are canceling their appointments with his wife; and teenagers are amassing on the pathways near Josh’s house, begging for advice on how to jump into the past or future, just so they can get away from the here and now.

A little too laid-back for its own good, though it does rally itself at the end with some unexpected developments to come out a genial little piece of time-travel trickery.