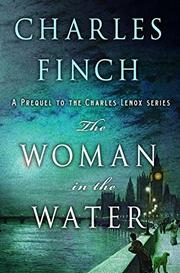 THE WOMAN IN THE WATER

The prequel to the career of astute Victorian private detective Charles Lenox.

Our detective has just turned 23 at the start of Finch’s (The Inheritance, 2016, etc.) 11th mystery. Lenox is determined to begin his career as a private detective, hoping to find his first big case from the multitude of crime stories in London’s newspapers. When a letter shows up in the Challenger boasting of the perfect crime, Lenox and his school friend–turned-valet, Graham, at first believe it a hoax until they connect the dots to an unsolved murder from a few weeks prior. A woman, strangled, washed up in a wooden box on Walnut Island, and no one has reported her missing. Even though Lenox’s gentleman-detective vibe is a source of mockery at Scotland Yard, he takes his findings to the chief right away. He can’t risk a second “perfect” murder, which, if the Challenger letter is to be believed, will happen at any moment. Lenox’s Sherlock-ian methods of deduction keep the narrative charged, and his soberness surrounding murder is a welcome touch: “this woman had lived; she had breathed as they all breathed here upon Bankside now; now she was gone. That must count for something.” We’re reminded of Lenox’s youth as he enjoys society parties and stumbles over his feelings for his close friend Elizabeth, but as Lenox develops a portrait of his murderer, the clouds over London grow darker. Clues point to multiple layers of deception meant—and able—to lead even the most seasoned detective off the trail. Lenox must try to find a hidden weakness behind the illusion of perfection, knowing full well that a mixture of pretension and anger in a person can be a very dangerous one. Lenox has officially reached the big leagues—the conclusion waiting for him is nothing short of chilling.

A case with enough momentum to recharge this series and grab new readers with its pull.