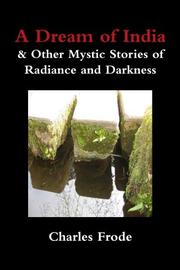 A Dream of India

& Other Mystic Stories of Radiance and Darkness

In this debut collection of short stories, characters experience spiritual awakenings through dreams and reminiscences.

An epiphany, it seems, can come about by simply remembering. Such is the case for the unnamed narrator of “Gravel and Fern,” who perceives his wife in an entirely different light only after she’s dead. Memory is often a catalyst in these tales, ultimately sparking Vietnamese soldier Steele’s religious turn in “Gold Leaf” or prefacing the shocking event that befalls Uccello, a baker recalling someone he’s lost, in “Dough.” Characters find insight in dreams as well, dream imagery that Frode generally augments with something more tangible. Nathan of “In the Darkness of the Dark Night,” for example, has a vision of falling stars that he later sees as helicopters—like an invading Army. Metaphors are unsubtle but never clumsily so, such as the serene “Levees,” in which a monk, Brother Paul, watching the flooding of orchards he tends, is flooded with recollections of lost loved ones. In the same vein, real-world elements that usually accompany the stories’ spirituality are both suitable and engrossing; in “Above the Tree Line,” an overnight backpacking trip up a mountain is just as therapeutic for the doctor as it is for the patient. There is, however, occasional repetition: “Spice,” in which Herbert’s beloved, memory-triggering spices are opposed by his hateful stepfather, Frank, is immediately followed by “Iridescence,” with Carl seriously contemplating killing his own abusive stepfather, Chet. Frode recurrently lingers on descriptive passages, as many characters lament the past, including Brother Clayton, who in “Clay Bodies” focuses on a pottery wheel, its precision reminding him of his days as a mathematics professor. The writing’s steeped in lyricism, regardless of content: sights at the farmers’ market in “Slow” entail “thin Botox women carrying Chihuahua dogs in their bared skeletal arms, an ultimate fighter type hazarding a leashed but prohibited pit bull through the crowd,” and so on. The book closes with “The Door Maker,” in which the dream-motivated title character tries to build a door to various dimensions. It’s a befitting conclusion, blurring the line between reality and mysticism.

Inspired personal journeys that, even when traversing other worlds, stay grounded in the one readers know.