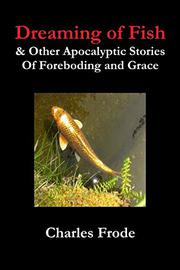 & Other Apocalyptic Stories of Foreboding and Grace

A volume of short stories explores dark spiritual territory, examining themes of destruction on both a personal and global scale.

In the poignant and heartbreaking “Dreaming of Fish,” a man trying to come to terms with a terminal brain tumor makes one last journey to the mountains where he and his wife have found so much joy. “Mirror Mirror” is a bit more abstract, about a man working in a frame shop who becomes obsessed with a woman’s painting, eventually trying to lose himself in the work’s world. A few tales in, the scope of the stories begins to expand. “In Its Luster” follows a schoolboy as he falls in love with a classmate, an experience reflected in scenes around the world, from an Iraqi astrophysicist to a musician who tunes his guitar. “Nolo Contendere” shows a young man developing into a serial killer, waiting with a small arsenal to shock his small town. “Gathering Algorithms” and “Which Was Once” take the apocalypse quite literally. The former is the most eerie, portraying an increasingly digital world that causes trees to grow out of control and uproot, resulting in massive devastation. The latter, a blow-by-blow account of an Armageddon where fascism increases in reaction to disasters and human hypocrisy accelerates the planet’s doom, is all plot and no characterization. The final three are more personal, ending with the transmigration of the soul of a female boar into a newborn child. Frode’s (One Times One, 2016, etc.) wild imagination is on full display here as he tries to connect these intriguing stories with the ideas of artists and thinkers like Ramana Maharshi, T.S. Eliot, and Russell Hoban by presenting quotes from their works by way of introduction. In this bold assemblage, the author’s prose can be thick, as in “Scree” when he describes a character’s outpouring of secret thoughts: “The extreme cognitive myopia under which he is now struggling is causing him to utter words and thoughts that have always fallen mute between the integers and symbols of his formulae.”

Though its reach may sometimes exceed its grasp, this collection is never less than daring and ambitious.