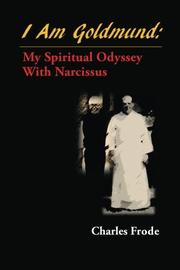 My Spiritual Odyssey with Narcissus

A memoir recounts a friendship’s depth and intimacy, inspired by a Herman Hesse novel.

Even when Frode (One Times One & Other Numinous Stories of Redemption and Loss, 2015, etc.) was a young boy, he was drawn to the meditative refuge provided by silence. It became obvious to others by the time he was a teenager that he was destined for a religious vocation. Frode was ready to become a monk by age 17, after his high school graduation. He was still too young, though, and took philosophy classes at a local college while spending his time off at a Trappist monastery in Northern California. There he met Brother Paul Williams, who became his closest male friend. Their kinship was profoundly spiritual as well as intellectual. They were fellow travelers on the winding path to transcendence: “Yet here was a man who was looking for the same elusive thing as I was—how to best live on the deepest levels of life.” Frode eventually decided to leave the monastery, and thoughtfully chronicles his adventures, which include two wives, parenthood, and no shortage of erotic experimentation. In some respects, the book is a tribute to the author’s mentors, and he lovingly discusses two professors whose influence remains indelible, and Doctor David, a healer and close confidant. This is also a philosophical autobiography that charts the arc of Frode’s development; like one of his idols, Thomas Merton, he read widely and was magnetized to Eastern spiritual writings. Still, the recollection’s centerpiece is Frode’s connection to Brother Paul; the author uses Hesse’s Narcissus and Goldmund as a literary key to understanding their mutual affection. Frode begins each chapter with an excerpt from that book, juxtaposed with one from his correspondence with Brother Paul. This is a strikingly candid memoir, and the author’s account of Brother Paul’s death—Frode was at his side when he took his last breath—is poignant. It’s never clear why the author left the monastery—he chalks up the impulse to an “inner voice” beckoning him to the beyond, but this is strangely trite for an otherwise searching examination. In addition, Frode’s writing style strongly favors the verbose and grandiloquent—paragraph-long sentences are bursting at the seams with gratuitous adjectives. But this remains an emotionally moving homage to a beautiful friendship, a peculiarly cerebral love letter.

A touching, if sometimes meandering, account of a half century of brotherly love.