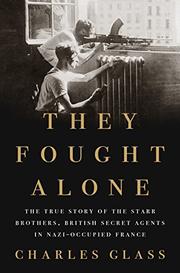 The True Story of the Starr Brothers, British Secret Agents in Nazi-Occupied France

An exacting reconstruction of the exploits of two Anglo-American brothers who fueled French resistance to Nazi occupation.

Former ABC News chief Middle East correspondent Glass (Syria Burning: A Short History of a Catastrophe, 2016, etc.) creates a fresh, detailed take on the patriotic legend of anti-Nazi insurgency by focusing on the diverse array of heroes and villains the brothers encountered once dispatched in 1942 to develop resistance cells for Britain’s Special Operations Executive. “While British agents like George and John Starr learned how to kill,” writes the author, “training schools could not teach them whom to trust.” The brothers’ divergent experiences provide an inherently compelling narrative. Over two years of covert organizational actions in the Gascony region, including receiving weaponry and agents and maintaining communications with SOE, George gained renown as an effective, principled officer, culminating in sabotage and combat operations following D-Day. However, John was arrested in Paris by Nazi counterintelligence. He cooperated with his interrogators, secretly documenting the Funkspiel, or “playback,” of captured radios, a successful counterdeception of SOE. Nazi officers who’d taken a liking to him spared his life after a thwarted escape attempt, although he was later sent to concentration camps. Both brothers survived the war only to see their reputations tarnished; George was accused of allowing the torture of Gestapo agents, while John was tried for collaboration in France. Both were eventually acquitted; as Glass concludes, “each Starr had experienced a different war….Each always rose to the defense of the other.” The author ably captures the stubborn courage displayed by SOE agents and the French resisters who gathered around them, and he clearly portrays the clever functionality of Allied espionage and insurgency tactics despite the brutality of the Nazis and their collaborators. His determination to fully document the sprawling web of individual players, political factions, betrayals, and flashpoints that compose the French resistance narrative results in a history that casual readers may find dense but that World War II buffs will relish.