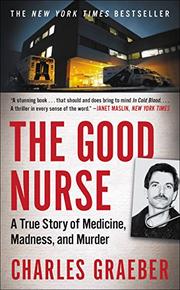 A True Story of Medicine, Madness, and Murder

The terrifying, true tale of nurse Charles Cullen, a man who worked with the most vulnerable of patients for 16 years, delivering life or death on a whim.

A whodunit where the culprit is identified on page one is as strange as a thriller with no surprise ending, but journalist Graeber presents these facts right from the beginning, never doubting the strength of the story. It works. Even without an uncertain finale, this true-crime tale delivers mystery and intrigue. The author begins with the satisfaction Cullen felt in his work, the good money he made and the doors open to him despite the litany of problems littering his professional and personal record. The author describes how Cullen came to nursing, how he felt a sense of belonging and distinction in his role, and the dysfunction of his personal life. Soon, Cullen was exerting control over his world by taking the lives of patients. Graeber does a particularly good job of showing the mounting evidence against Cullen as his misdeeds were originally discovered, following the nurse from accusation to accusation. The author imbues the story with an intense level of anticipation, with one question constantly in the background: Who will stop this man and when? Graeber describes the administrators who refused to report Cullen in the same way as the whistle-blowers who insisted on involving the police. The author’s cut-and-dried delivery serves to make the many paradoxes more poignant and lend some humor to a dark subject.

A thrilling and suspenseful page-turner that is sure to be loved by the majority of readers, who will be both horrified and fascinated.