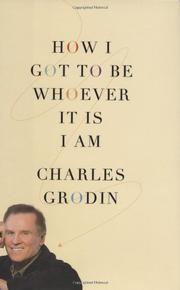 HOW I GOT TO BE WHOEVER IT IS I AM

Like his radio commentaries for CBS News, this memoir from actor-director-writer-activist Grodin (I Like It Better When You’re Funny, 2002, etc.) offers kvetching in lieu of insight.

The author has plenty of material: getting hired and fired twice by Candid Camera; his longtime stint as a faux-malcontented guest for Johnny Carson; his frequent film and stage work (Midnight Run, The Heartbreak Kid, Rosemary’s Baby, etc.); his gigs as a commentator on 60 Minutes II and as a cable-TV talk-show host. Unfortunately, heartfelt reminiscences of such past and present friends as Herb Gardner, Peter Falk, Ellen Burstyn and Elaine May are undercut by Grodin’s tiresome testimonials to his own acting skill, intelligence and humanitarianism. From grade school to today, he cites a single cause for his clashes with teachers, directors and TV executives: “doing something that no one else was doing…asking questions.” When not relating incidents in his life, Grodin inveighs against such petty annoyances as Hollywood producers, Manhattan co-op boards, the urban legend that he turned down The Graduate, even a basketball coach at his son’s school. He frequently sounds like Andy Rooney–lite: “I honestly don’t look down on how anyone dresses, as long as they’re properly covered.” Chapters run about as long as Grodin’s broadcast musings and are equally colloquial in tone. In substance he ranges from superficial to maddeningly enigmatic—e.g., calling acting coach Lee Strasberg and Woody Allen, without elaboration, “the two most socially uncomfortable people I’ve ever met.”

Grodin’s considerable talent is dwarfed here by his self-regard.