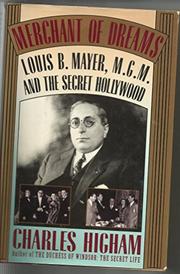 Louis B. Mayer, M.G.M., and the Secret Hollywood

Big bio of Louis B. Mayer, the most thorough ever, from the tireless Higham (The Duchess of Windsor, 1988, and lives of Cary Grant, Orson Welles, Errol Flynn, and others). Higham researches Mayer (1885-1957) as richly as he did Wallis Simpson, but the mogul doesn't register here with the same hormonal impact as the duchess—although one reads a life of Mayer not only for gossip but also for Hollywood history. The book does outweigh Diana Altman's Hollywood East (p. 889), a business-oriented bio of Mayer, but it falls into the same need to detail the studio background, thereby draining momentum from Mayer's life. Few readers will find much that's new here, despite Higham's copious interviews, including many in which he disagrees with his interviewees about legendary incidents—for example, disputing MGM story chief Samuel Marx's suggestion that studio exec Paul Bern (Jean Harlow's husband) was murdered and that Mayer tampered with the evidence to make the death look like suicide: Higham contends that, on the fateful morning, only Irving Thalberg, not Mayer, arrived at the Harlow/Bern manse. Higham tells of Mayer's affair with Paramount chief B.P. Schulberg's wife and of his lust for Jeanette MacDonald; of Mayer having an underling take a year in jail for Clark Gable after the star killed a woman with his car; of the studio chief's spending perhaps $400,000 to cover up John Huston's similar trouble; of Mayer's fears that the bisexuality or homosexuality of many of his actors, including Garbo, would be exposed. But mainly Higham tells of the son of an immigrant junk dealer who built the greatest studio on earth and then was fired by top money-man Nicholas Schenck. The MGM story still again, though L.B. stands at center stage. (Photographs.)