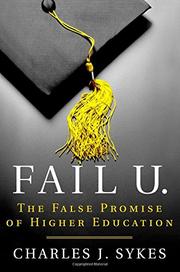 The False Promise of Higher Education

Talk radio host Sykes has built a literary legacy of alarmed books with titles such as A Nation of Moochers, Dumbing Down Our Kids, and A Nation of Victims, all jeremiad rather than paean. Sure enough, here he finds everything to complain about and nothing to exalt in the once-vaunted American system of higher education, which has fallen victim to corporatization and—well, Sykes wouldn’t dare blame the free-market dismantling of what used to be free education and free thought. Instead, he elects as his bad guys the professorial elite, who get paid big bucks not to meet with classes, a cry he sounded in his ProfScam (1988), and who hold an “active contempt for teaching.” Granted that this is true of large research universities, where salaries are more often than not the product of soft money—see Hope Jahren’s recent book Lab Girl for the grim details—but where teaching is emphasized, Sykes denounces the plethora of tailor-made majors, the dance studies and Anthropology of Play courses and the like, which are, one supposes, less rigorous than the curriculum he would seek to offer in their place. What to do, in a culture of trigger warnings and hyperextended student loans, further entries in Sykes’ long list of complaints? Why, let fewer students in the doors, of course, and downsize the modern university, which “has sought to be all things to all people, endlessly multiplying programs, centers, majors, and degrees.” Also, let’s get rid of tenure, which “creates a class of untouchable aristocrats,” a description that most faculty, tenured and otherwise, would find laughable unless ideologically invested otherwise.

Though Sykes’ Limbaugh-esque project scores some good points along the way, his shrill denunciations don’t get at the core of the real problem or at a solution.