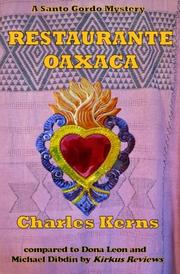 Robert “Roberto” Evans, aka Santo Gordo, once again becomes embroiled in a battle not of his own choosing, this time against a gang of thieves and murderers.

This third volume of Kerns’ (Oaxaca Chocolate, 2016, etc.) Santo Gordo Mysteries opens with Roberto, an overweight American expatriate in his mid-60s, heading back from a mountain hideout in Mexico. He needed to recuperate from his last adventure and wait for the blowback caused by the death of a fellow expat to die down. Convinced that he can no longer remain in his beloved Oaxaca, Roberto now decides it is time to return to the United States. His plan is interrupted on the bus ride back to town when he witnesses a robbery that results in the murder of a police officer. It turns out that the policeman is a relative of Efraím, Roberto’s best friend and crime-solving partner. Efraím, a taxi driver who, through his network of fellow taxistas, knows everything and everyone in the small city, catches Roberto just before he boards a plane: “Come. I need you. Now—emergency—quick.” The improbable sleuth is back in the game. They hatch a plan to catch the thug who killed Efraím’s cousin, with Roberto the bait to lure him into a trap. Fans of the series will know that a more complicated crime is yet to be uncovered. The colors, smells, music, and especially the food of Oaxaca and its surrounding villages jump off the pages in this tale. The pace remains leisurely. Roberto walks slowly; he takes the time to study the streets, the architecture, the people; he needs his afternoon naps; and he never misses an opportunity to eat. Kerns offers some background for new readers of the delightful series, and this novel, a bit more plot-driven than the earlier ones, can be read as a stand-alone. But it is best enjoyed after reading the previous volumes, starting with the opener (Santo Gordo: A Killing in Oaxaca, 2016) when Santo Gordo first earned his moniker.

An entertaining mystery propelled by a hero to be savored, a smart, gentle cynic who comfortably interacts with both expats and locals.