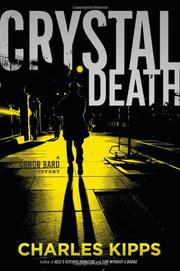 Conor Bard, the NYPD’s singing detective, makes a second page-turning appearance in the case of the blood-red diamond.

Diamonds were not Zivah Gavish’s best friend. Her elegant throat cut, she’s discovered in her sumptuous New York apartment, the fabulous red gem that had been in her custody gone with her murderer. The well-known, well-liked, extremely successful dealer was also young and beautiful, and as Conor looks down at her lovely, lifeless body, he finds it difficult to maintain the detachment other veteran cops manage so routinely. “Because I’m not really a cop,” he tells himself dismissively. “I’m a musician.” Forty-something Conor, in possession of a been-there, bluesy baritone that audiences—particularly females—respond to, has demonstrated a first-rate sleuth’s willingness to think outside the box. Clues and suspects abound, as does pressure from the NYPD brass to crack the case yesterday. Stepping up the pressure is Conor’s new and inexperienced partner, who’s confronted with her first big-time homicide. Lieutenant Rooney thinks that more seasoned help is called for. But Conor likes sharp-tongued Rosita Rubio. He thinks she’s bright and resourceful and a good fit for him professionally. And she certainly is eye candy.