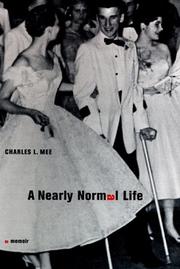 Frank memoirs of an adolescence shaped by a bout with polio that changed forever the author’s body and psyche. This slice of very personal history comes from a man better known for his plays and his diplomatic and political writings (The End of Order: Versailles 1919, 1980, etc.). Mee was stricken with spinal polio in the summer of 1953, when he was 14 years old. From a healthy, athletic 160-pounder, he was rapidly transformed into a weak 90-pounder able to move only three fingers of one hand. Threaded through his recollections of his hospitalization and rehabilitation is a brief history of the disease, including a vivid portrait of the culture of fear it engendered, the role of Franklin Delano Roosevelt in the National Foundation for Infantile Paralysis and the March of Dimes, Sister Kenny’s excruciating therapeutic techniques, and the search for vaccines by Jonas Salk and Albert Sabin. Even more fascinating are his accounts of the useless medical and surgical treatments performed by doctors anxious to do something, anything, for their young patients. The heart of Mee’s story, however, is his confrontation with the reality of what happened to him. Deeply ingrained with the ideal of the normal—he gives a wonderful picture of middle-American normality of the 1950s complete with paint-by-numbers art, Father Knows Best, and stay-at-home moms raising football-playing sons and cheerleader daughters—Mee could not deny his own deviance from that normality as he struggled to pass for a normal teenager. Fortunately, the world of books and the mind opened to him, and he pays tribute to those who helped him find his way there. Mee ends these memoirs with his leaving home for Harvard, but an epilogue provides a glimpse of the nearly normal life he created for himself in the years that followed. A reminder of a past era of conformity and a clear depiction of what it means to be an outsider.