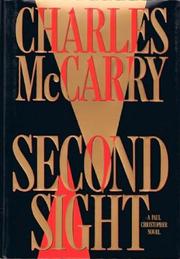 The seventh and final volume in McCarry's series of novels about poet/spy Paul Christopher and his family. Not far into the story, Cathy, Paul's beautiful, pregnant and wildly jealous first wife, sees him in a Paris park with his new love Molly. Operatically, she vows to raise their child in a place beyond discovery. Luckily, she has just met Lla Kahina (a.k.a. Meryem), an exotic old Berber woman who possesses the second sight of the title. They travel together to Meryem's North African mountain hideaway; Cathy gives birth on a mountain pass before joining Meryem's Ja'wabi, Jews living as Moslems for the past thousand years. For all their secrecy, Hitler's S.S. knew about them (``German thoroughness''), knowledge that has filtered down to a Palestinian terrorist called Hassan, who plans their extermination. By now it's the 1980's, Cathy has been killed by terrorists during a desert ostrich hunt, and her grown daughter, Zarah, has found her daddy in Washington; Paul, the spy game and the Outfit behind him, is living quietly with his second wife Stephanie. But could this terrorist threat to his daughter (``she thinks like a Jew, feels like a Jew, talks like a Jew'') tempt the old warhorse into action one more time, shoulder to shoulder with the retired heads of American and Israeli intelligence, not to mention old buddy (and Outfit head honcho) David Patchen? Sure enough, Paul finds himself in the midst of a perfunctory South of France denouement. That's the gist of the plot. This grab-bag of a novel also includes a long history of the Ja'wabi; scenes from 1920's Paris and 1930's Berlin, where Meryem was Paul's mother Lori's best friend; a rehash of Paul's Vietnam problems (already covered in The Last Supper); and the endlessly delayed revelation of the hidden meaning of Lori's 1939 arrest by the Gestapo. A confusing, unfocused, implausible work, then, arguably the weakest of the series.